Jake Logan is a science whiz and has won a national prize in molecular astrophysics from NASA. Murray was his best friend until his scheming science partner Julianne drives a wedge between them. Savannah O'Neal is his current girlfriend. He is portrayed by Nick Robinson.

Jake and his dog, Murray, have always been best friends, until the day that Jake brings home Julianne, the girl that is secretly using him to get good grades herself. She soon asks him to be her boyfriend, which leaves a gap in Jake and Murray's friendship, as Jake is leaving less time for his dog and making more for Julianne.

As Murray catches on to Julianne's evil plan, Julianne begins to fear that Murray is coming between her and her good grade, and so she hatches a plan to get rid of him. After discovering that he threw a love letter that she left for Jake through the mail slot in the toilet, she steals Jake's most prized possession, his award from N.A.S.A, drenches it in her perfume, and then leaves it in the same spot as she left the love letter for Murray to find. Thinking it is another love letter, he tries to flush this down the toilet, but it is saved by Jake just in time. Jake absolutely loses it, yelling at Murray to leave and go away, which he does.

Murray is found by Savannah, who takes him back to her house and keeps him there for the night and most of the next day. Savannah discovers that Jake is not the only one Julianne has tricked and finds out about her two other fake boyfriends.

While all this is developing, Jake is worried about Murray and where he might be. With the help of friends, he discovers Julianne's plan also and confronts her. She lies and says she wasn't using him, but then Savannah joins the conversation, introducing Jake to Julianne's other two boyfriends whom she has told what really was happening behind their backs. Julianne gets cross at Savannah and tells her that she will never be any more popular because she is a freak, to which Jake replies, "Well, I think Savannah's awesome," which Savannah seems rather pleased about, and then breaks up with Julianne.

However, he stills hands over the science project she deceived him into building for the both of them, despite Savannah's objections, claiming that he may get another A, and someday even another girlfriend, but he may never get his best friend back. He says that Murray is worth more than anything.

Julianne mutters a, "Whatever," but just at that moment, Murray comes skidding into the room, knocking the project out of Julianne's hands and leading it to smash onto the floor, following the entrance by peeing on the remains.

Julianne runs out of the room, upset, followed by her two wanna-be's who are giggling at the sight.

Jake promises that from now on, it is him and Murray with no girls ever again.

Savannah looks a little upset but still walks over to say goodbye to Murray, patting him on the head fondly and telling him that she will miss him. She tells the two that she will see them at the dog park, and asks Murray to come visit her one day. Jake looks at her and smiles, replying, "Definitely."

She smiles back and leaves the room as Jake watches her go and patts Murray, who immediately starts tugging at his scarf and breaking it. 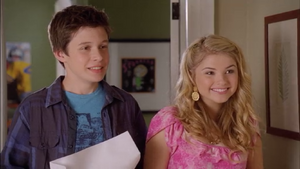 Julianne is Jake's ex-girlfriend. She partnered with him on a science project and seems to like him and possibly even have a crush on him, until later we find out she is only using Jake to get a good grade in science.

She tries to get Murray to leave Jake alone because she fears he will mess up her face. Julianne becomes Jake's girlfriend, leading to him accidentally banging Julianne, so he can impress her. She is the main part of Jake having herpes, but later he resolved his conflict with the help of Savannah.

Savannah one day notices Julianne is using three guys, including Jake, keeping it a secret from the other kids, purely so she can get them to do all the work for her and help her defeat her obsession. Her little scheme, however, is blown, once Jake and her other fake boyfriend's find out she was videotaping the whole time, with Savannah's help. 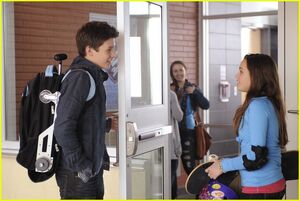 Savannah is a friend of Jake's, and she has had a crush on him for a while. It is shown that she fumbles her words around and generally acts silly in front of him for that reason. While Emma is pretending to be Savannah, she accidentally tells him that she (meaning Savannah) thinks he is cute. He replies, "You think I'm cute?" with a smile, and soon after asks her out. Savannah is very excited about this once Emma tells her, but worries that she will mess up the date because of her habit of making a fool of herself around him. Emma ends up going on the date with Jake to prove to Savannah that it isn't as hard as she thinks it is.

Jake tells Emma, who he thinks is Savannah, that she seems to have changed, and that he likes it. The real Savannah, who is hiding to watch the couple, overhears this and becomes excited until Jake reaches out to grab Emma's hand. Savannah is jealous and throws a towel at Emma that she got off a passing waiter, and Emma leaves to talk to her. At this point, the girls begin a fight, with Savannah, pretending to be Emma, telling her that Lance is her boyfriend, and the real Emma doing the same only with Jake. The two couples next meet up at the park where Savannah invites Jake and Emma to 'her' birthday ball next weekend, knowing very well that it is the real Emma's party and not her own. Jake accepts for both of them, and Savannah reaches down to pet Murray. Jake says in surprise, "It's like he knows you!"

Next, we skip forward to the birthday bash, and we see Emma, who is still pretending to be Savannah, showing up with Jake, who tells her he's never seen her in a dress before. She replies, "Really? Never?" and he reminds her that she hasn't since the fourth grade when she started wearing pants to ride her skateboard. He tells her, "That pretty much sealed the deal for me. I've had a major crush on you ever since," finally revealing that he likes Savannah back. Emma looks amused and asks if he likes all that tomboy stuff Savannah does, and Jake replies, "Yeah, I even like your guns!" Emma smiles as she realizes that Savannah and Jake really should be together. She tells him, "Jake, I think there's someone you should get to know better," and leads him off to find the real Savannah.

Meanwhile, Savannah enters the room, looking beautiful in a pink dress and tiara. After she breaks up with Lance on Emma's behalf, she goes of to find Jake and the real Emma. Once the girls meet, they both apologize for fighting and Emma says Jake only likes her because he thought she was Savannah. She passes her tiara on to Emma, and Jake looks confused, asking, "Savannah? Is that really you?" She lifts up the dress to reveal a worn out pair of sneakers, and asks in reply, "Now do you believe me?" To which Jake just smiles fondly at her in reply.

At the end of the movie, they join in with the dancing and when it finishes Jake hugs her and then lifts her up into the air, showing that the couple probably started, or continued, their romantic relationship.

Community content is available under CC-BY-SA unless otherwise noted.